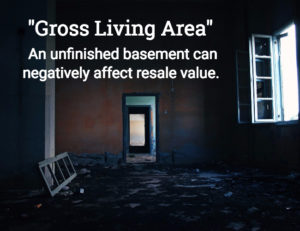 If someone told you that the first level of your home was an unfinished basement, and did not count towards the livable square footage of your home, would you be upset? It would be as if someone arbitrarily erased part of your home, and made it smaller than it really was! This is a really important story for more people than you might think.

Many traditional homes sit on flat lots and are uniformly situated. They may have an unfinished or partially finished basement, then a 1st level with kitchen, living room and dining room, and then a 2nd level with bedrooms. But what about the surprisingly large number of homes that sit on odd lots and don’t have a basement. These homes may find that part or all of the first level is below grade. Fannie Mae, banks and underwriters will tell you that if a home’s first level is below grade at all, that level cannot count towards the “gross living area”, and as a result greatly reduces the value of the home since it will be counted as a basement instead of living space. Here is what one bank representative had to say about this:

A duplex with a traditional fully finished living unit below grade with the main house above grade, with a Certificate of Occupancy for both units, is an exception to this situation. But, I had a client who had a three-level contemporary home in a neighborhood with rolling hills and a lake. As a result, the first floor of the home, which contained one bedroom, one bathroom, and a recreation room, sits partially below grade at the back of the house. Her home is almost 3,000 square feet of total living space in the real world. But in the banking world, based on the Fannie Mae definition of what creates GLA, the appraiser counted my client’s house as closer to 2,000 square feet with a basement! Hence, instead of the $900,000 appraisal, we were confident in getting in order to refinance the home, we got an appraisal of $780,000 and the refinance had to be canceled.

Imagine telling someone who raises a child in that 1st floor bedroom, and entertains and lives in the recreation room, that the square footage has now been erased from the ability to be counted as Gross Living Area! It seems absurd. If the market will bear a price of $900,000, why wouldn’t it be able to be appraised that way?

And the more frustrating part of this story is that when my client bought the home in the real estate boom of the early 2000’s, Fannie Mae and the banking industry interpreted their own rules much more loosely, so this issue did not come up when my client bought the home. So now the client may have trouble selling the home because potential buyers will have trouble getting the proper appraisal to support the contract price.

There are more homes than you may think that fit this scenario. I have seen homes in urban settings where the 1st level is entirely below grade to some degree, and I have seen many homes in areas that are not flat where part of the 1st floor is below grade. Take a look around you the next time you are driving around a neighborhood, and see how many homes have a 1st floor that is not a basement, but that is partially or completely below grade.

As an aside, below is the oddball potential solution my client and I considered at the time:

“I just had an odd idea pop into my head on the issue of the first level being partially below grade, which Fannie Mae uses as an excuse to dismiss all of the first level and not use it as Gross Living Area. I am getting ready to go through a similar scenario on another appraisal right now and was trying to come up with something for what I know will be a problem for those clients. And it just hit me, and it may sound crazy to you but I wanted to run it by you nonetheless. How about digging out around the first level, re-landscaping, and magically make the whole first level above grade!?

“I ran it by my other clients who will have this issue, and they are considering this and are going to get estimates to dig it out, make it pretty with new landscaping, and then we can use the whole first level as Gross Living Area, and get the appraisal that we deserve. Obviously, we do not want to do something that would ruin the way the house sits and looks against the landscape and the yard, and we also would not want to do something that would be expensive, but just a thought I wanted to run by you.”

Imagine having to dig out part of your first level, rip up shrubs, plant new landscaping, painting, and paying for all of it, just to be able to sell or refinance!

I think there should be a variance on this rule, with some logic introduced into each situation. Obviously, if a house has “some” of the yard pushed up against it on 1/3rd of the house on the backside, and the 1st level has plenty of light, windows and gets used a living area, an exception should be made!

Schedule a call with me before you do anything drastic to your lot in order to sell.

78 Responses to “Below Grade Square Footage Gets Erased!”

Click here to cancel reply.
How Do Realtors Really Get Paid?
When is a 2 unit a 2 unit?
Grid View List View