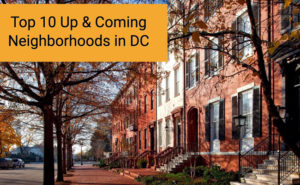 What makes a neighborhood “up and coming” in the DC area? You may have heard of the U-Street corridor and remember that it used to be abandoned buildings and vacant lots. Now it’s where professionals want to live, it’s trendy, and packed with diners and shoppers. Even though it took years of slow transformation, it would have been nice to own property before it got hot.

So how do you figure out what part of town will be next? Listen for the buzz about a new restaurant or local farmer’s market, it may be the next neighborhood that’s “up and coming”. Consider the walk score and if the area has access to public transportation. Was it known as the rough part of town? Has it received a makeover to one of the public parks or renovation to a vintage building? If developers start tearing down the old and reconstructing high-rise apartments and high-end townhomes, you can bet that there is a reason for it.

Most “up and coming” neighborhoods experience a transition from low-income, long-time residents to new middle-class and upper-class professionals. The neighborhood that was once considered a rough part of town becomes hip and more affordable. These areas are often full of character, cheap restaurants, food trucks and local grocery stores attracting artists, hipsters, students, and a younger working generation. As that new wealthier population grows, they bring more money to the community, rents go up and new people and businesses start to move in. Eventually long-time established residents are forced to relocate due to the higher cost of living.

For a long time the majority of homebuyers preferred moving to the suburbs. In the past two decades there has been a flux of professionals moving into urban metro hotspots. Some say it’s a huge amount of millennials that want to live in the city, but it may also be the older professionals who need to cut down on a commute or would rather walk, bike and be active. Once a popular neighborhood becomes high-demand, limited availability and high housing prices are sure to follow. Those who want the city life and have not yet bought look around at the surrounding neighborhoods with more affordable and obtainable price tags.

Despite how great an “up and coming” will appear to be, there are 5 important characteristics that will make or break the neighborhood for most homebuyers:

Based on current data, trends and what we know moves the middle-class, here’s an estimation of some possible up and coming neighborhoods of 2017.

According to the Washington Business Journal, Anacostia real estate is in high demand and has enough interest for bidding wars. There are people thinking that this will be the next H-Street Corridor. Because of the buzz it made my list. But look at the scores below; with high crime and bad public schools, this could be a long shot.

Total Crimes in 2016: ~167 (Crime has slightly increased from previous year.)

Another local buzz is the Brookland area of Washington DC. At least the walk scores are better compared to Anacostia, yet the crime is still high and schools could be better. Real estate pricing already seems to be more expensive in this area too.

Snuggled between Brookland and the United States National Arboretum, this area seems to be a better option, with better crime rate and decent real estate options. The walkable score is a similar scenario to what you would find in Brookland. Schools could still be better. Possibly attracting a younger crowd is live music at the Echostage venue.

Total Crimes in 2016: ~27 (Crime has slightly decreased from previous year.)

This area has walk scores slightly improved. Crime is high, yet the schools are better. Close to the H-Street Corridor which may attract those who want to live near this hip new district.

Northwest Washington has better schools and walk scores are slightly better having transit nearby. The average housing prices are on the higher end. Renovations in this area have already started. Low crime and good schools must be the attraction.

Total Crimes in 2016: ~86 (Crime has slightly increased from previous year.)

North of southeast Washington is an area called Benning. It’s nestled in between the Minnesota Avenue and Benning Road metro stations, which is a great option for those who appreciate a walk, bike, or transit commute to work. The real estate is decent, with a decreased crime rate and average public schools.

Total Crimes in 2016: ~59 (Crime has slightly decreased from previous year.)

Congress Heights is a very cozy spot next to Anacostia–Bolling, a 905-acre navy and air force base. I would say the transit score should be higher since the Congress Heights Metro is accessible. Housing prices are reasonable. Crime has significantly decreased and the schools are above average in this district. It also has community and a medical center close by.

Total Crimes in 2016: ~110 (Crime has significantly decreased from previous year.)

Winterizing Your Home in DC
And To All…A Good Night (and a good 2017)!
Grid View List View